Time for something new! Join us on Saturday #atnoon in the lovely garden terrace at Expirat for a daytime mix of #vrtwmusic , great drinks and friendly people. Tasty food will be around!

We are family friendly! Kids and teenagers (under 18) must be accompanied and their entrance is free of charge.

Don’t look at the time, sun is still up.
Some glasses of ...Citeste mai mult-->

Time for something new! Join us on Saturday #atnoon in the lovely garden terrace at Expirat for a daytime mix of #vrtwmusic , great drinks and friendly people. Tasty food will be around!

We are family friendly! Kids and teenagers (under 18) must be accompanied and their entrance is free of charge.

Don’t look at the time, sun is still up.
Some glasses of wine have already gone by.
Time to move to the groove!
Who cares? It’s Saturday.

Member of the prestigious collectives “45 Live” and “Dusty Donuts”, Suspect is a renowned DJ that travels the world never leaving his record goodie bag aside. From LA to London, through Abidjan and Beirut, he shared the stage with the biggest names in the industry and he just loves to share his vinyl discoveries with as many ears as possible.

DJ Suspect released a number of albums and was involved in countless projects with serious labels such as Bbe, Truth & Soul, Heavenly Sweetness and Rocafort, just to name a few. He recently released a double LP together with Marc Hyper under Unique Records and he’s currently working on some more, including a much awaited release with Guts’ Pura Vida label, planned for 2020.

Bully is one of the Romaninan DJs that has successfully created a bridge between underground and mainstream. Starting out around 2000, he conquered the dancefloors of literally all relevant clubs in the country. He likes to create diverse musical experiences for his public through a hyped up mix of different genres, from funky breaks & old-school hip hop to breakbeat & drum’n’bass and also local spices in terms of folk and… who knows what next?

„I’m inspired by the life itself, the moment, the people around me. I like to play with a lot of genres because the most important thing for me is that the public feels as good as I do.”That’s what Alt Om (Vlad Roseanu) thinks about the game and that’s why his music is extremely diverse – from electronic to funk and disco or break beat, house and techno.

„I grew up with Pink Floyd, Jimi Hendrix, Deep Purple and Led Zeppelin and in my early teenage years I was listening to Depeche Mode. Now… I’m just fooling around in the big musical playground.” DJ and promoter from 2011, Alt Om grew up in an art-influenced home in Bucharest. Precisely this leaning towards arts made him pursue a career in music but also in graphic design, interior design and set design. And, without any doubt, this artistic perspective on life is reflected in his music.

He likes to be updated so he’s always digging for new genres and new music for remixes and mashups. That is how he gathered a large collection, extremely variated and there is no doubt that he will always make you stand up and dance. He was noticed shortly after his first appearances and requested for parties and festivals like B’ESTFEST, Electric Castle or Full Moon Live, all over Romania. He shared the stage with many talented DJ’s like Featurecast, Stickybuds, Kraftykuts, Atomic Hooligan, Jon Kennedy, Borrowed Identity, San Soda, The C90’, Zed Bias or Delano Smith. Alt Om was also the opening act for great bands and artists like Club Des Belugas, Moonlight Breakfast, Golan and NOPAME. 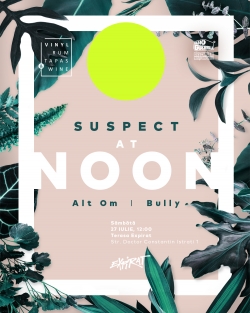